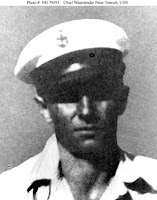 From that era of the Second World War [WW2] this man awarded the highest decoration possible for his actions on the Day of Infamy, 7 December, 1941. Losing his life in the process AND NOT FOR SIXTY-FIVE YEARS LATER HIS MEDAL AWARDED TO THE NEXT OF KIN.

"For distinguished conduct in the line of his profession, and extraordinary courage and disregard of his own safety, during the attack on the Fleet in Pearl Harbor by the Japanese forces on 7 December 1941. Although realizing that the ship was capsizing, as a result of enemy bombing and torpedoing, Tomich remained at his post in the engineering plant of the U.S.S. Utah, until he saw that all boilers were secured and all fireroom personnel had left their stations, and by so doing lost his own life ." 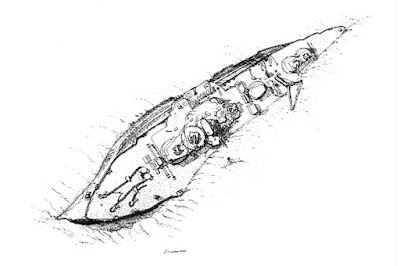 The USS Utah having been torpedoed and sunk during the air raid, capsizing, sailors including Peter Tomich their remains trapped inside to this very day. Salvage operations in vain, that ship now a memorial at Pearl Harbor. This artists sketch showing how the ship rests on the port side partially submerged.

"There are only two Medals of Honor ]MoH] in American history that are not claimed because a next-of-kin could not be found, one in the Indian Wars and Peter Tomich at Pearl Harbor, Hawaii on December 7, 1941. He died a hero on the battleship Utah."

NO living next-of-kin having been located in the United States it not being until SIXTY-FIVE years subsequent after a thorough and meticulous search that a living relative was located.

I highly recommend you watch this YouTube video of the award ceremony! Such an event as this perhaps WITHOUT PRECEDENT!

"Peter Tomich, Medal of Honor given to the next of kin"