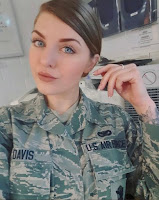 "This Knockout Instagram Girl May Be the USAF’s Most Cost-Effective Recruiting Asset."

Kelly Davis. Described as an airman!

And boys as I have said beware the Kelly. Not Kelly personally but images as might be found on Instagram and downloaded to your PC or smart phone. Entities, possibly foreign intelligence services hostile to the United States might have secretly embedded malware in those images, risque, enticing and alluring as they are. Malware that allows the unknown and hostile entities to take control of your PC or smart phone without your knowledge and use YOUR OWN device against you in some manner.

Read further a previous blog entry that describes such malware with additional links: