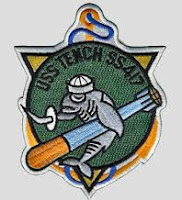 Serendipitously came across this item of interest.

"The Taiwanese Navy has two even older submarines, Tench class vessels commissioned in the 1940s that were purchased from the US Navy in the 1970s. Their torpedo tubes were sealed, but the subs are still operational and reportedly capable of combat."

"Last year Taipei announced a US$19 million retrofit program to improve the hulls and diesel navigational systems, intended to extend their service lives until 2026. This will make them the longest-serving submarines in history, though their deterrence value against the Chinese forces is questionable."

OF EXACT WHAT DETERRENCE VALUE A SUBMARINE WITH SEALED TORPEDO TUBES PRESENTS I AM NOT CLEAR AS TO THIS!

* A Tench class submarine of the World War Two Era would have cost about $3 million USD.

* A modern brand-new diesel/electric boat costs about half a billion dollars [USD].

* Unseal those torpedo tubes and equip the two Tench class submarines with ENCAP [encapsulated] Harpoon anti-ship missiles already in the Taiwanese arsenal and you do have a fighting vessel that when used in the proper manner can pose a formidable threat.

Devoted readers to the blog take it from there!