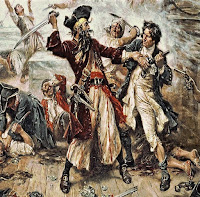 Pirates of the Caribbean. Not a movie. Not a Disney World attraction. For real and very deadly.

Not cutlass and flintlock pistol either. Today AK, RPG and PKM.

From Spectator USA and the article by Colin Freeman

"Pirates of the Caribbean: How Venezuela’s near collapse is causing a crisis on the seas"

"Families are scavenging to survive. It’s not quite Somalia – but it isn’t far off"

"In lawless ports like Guiria in the Venezuelan state of Sucre, the pirates operate with near impunity, kidnapping Trinidadian fishermen and holding them for ransom. They also smuggle boatloads of cocaine and guns into Trinidad. Guns and coke are two commodities still widely available in Venezuela. On the return run, the pirates bring back the ordinary provisions that are in desperately short supply in their home country: nappies, rice and cooking oil. Think Narcos with speedboats and packets of Pampers."

That topic of modern-day piracy not an item as included in the blog for some time now. Think usually Strait of Malacca, Horn of Africa, Nigeria. And now in the ancient and venerable manner the Caribbean. As it was during the times of Henry Morgan and Jean Lafitte so as it is now in those waters contiguous to Venezuela.