Russian weapons developments continue unabated. Even since the end of the Cold War and the demise of the Soviet Union new weaponry has been fielded and made available for export.

Such weapons and weapons systems to include: [but not exclusively so]

[Variant of the Su-30 in the most sophisticated form able to perform maneuvers NO OTHER COMBAT AIRCRAFT EXISTING NOW OR ON THE DRAWING BOARDS OR IN CONCEPT FORM IS ABLE TO!!]

The latter [SP-AT], once thought to be an anachronism relegated to the scrap heap with the adoption of the most sophisticated anti-tank-guided-missile [ATGM], is now enjoying a comeback of sorts? Who would have thought so!

Self-propelled anti-tank [SP-AT] guns were fielded in enormous numbers during World War Two [WW2] by all combatants. A gun mounted on a tank chassis, WITHOUT THE PRESENCE OF A TURRET, and for the most part sans armor!

Referred to as “tank destroyers”! Sometimes called by the German“assault artillery”!

Self-propelled guns that could accompany and support the infantry, either in the offensive or defensive role!!

The direct-fire anti-tank [AT] gun was once thought, again, to be an anachronism, dead as the proverbial dodo. Until relatively recently, was still a TO&E item for the Russian motorized rifle division. An entire battalion of eighteen T-12 guns [100 mm] was a standard item within each Soviet/Russian division.

Anti-tank guns available to the Russian divisional combat commander. To be used in the role of:

* Guarding the "shoulders" of a breakthrough while the division is on THE OFFENSIVE!

* Guarding that avenue of approach into the divisional area of operations felt to be most vulnerable from enemy attack - - while on THE DEFENSIVE!

With regard to the wheeled version of the AT gun, NOT self-propelled, let us refresh our memory and recall that particular chapter from the Suvorov work, “Inside the Red Army” entitled, "Why are Anti-tank Guns not Self-propelled?"

"1. A towed anti-tank gun is many times easier to manufacture and to use than one that is self-propelled."

"2. A towed gun has a very low silhouette, at least half that of a tank."

"3. Anti-tank guns are used in two situations. In defense, when the enemy has broken-through, is advancing fast and must be stopped at any price. And in an offensive when one's own troops have broken through and are advancing rapidly, and the enemy tries to cut through the spearhead at its base, with a flank attack."

"During the war [WW2], on of the main reasons for the unyielding stability of the Soviet formations was the presence among them of huge but virtually immobile units of anti-tank guns."

[those towed anti-tank guns, when put into position, would have the prime movers moved to a secure location, less susceptible to attack. Gun and prime mover would normally NOT BE FOUND IN THE SAME LOCATION!!]

This new anti-tank gun and self-propelled variant did NOT require a whole lot of NEW sophisticated engineering? Tear the 125 mm smooth bore gun out of the latest and greatest Russian tank, give that gun wheels or place on a tracked chassis and voila’, you have your new weapons system!

Please note too that the SP-AT version has the integral ATGM included. Accurate with effective range out to 5,000 meters!! Formidable capacity available, whether the mission is offensive or defensive. 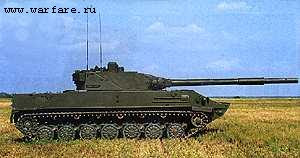 This is not a tank. Does not have the integral heavy Armor as would be found on an ordinary tank!

The U.S. at one time not so long ago considered fielding a similar weapon, the Buford gun. A tracked vehicle [there was also a wheeled version proposed] mounting a gun. Resembled a tank, but NOT a tank. A weapons system scrapped after some trial and error.

What do the Russians know that the “western” military powers do not know? Is the day of the AT gun and “tank destroyer” going to make a comeback?