"'I smoke about a pack a day, and a few cigars, and I drink an average of 15 10-ounce glasses of beer every evening, except on weekends, when it's more.'" - - Marine officer participating in a fifty mile hike.

[a Marine officer describing his life style in such a manner today would be promptly cashiered from the service??!!]

President Obama, just recently having taken the oath of office and now serving as Chief Executive, has already signed and promulgated some executive orders. Some of which have a definite military dimension to them.

Here is - - from the era of over forty years ago now, during the Presidency of John F. Kennedy, a fad, also the result of an executive order originally signed by Theodore Roosevelt, that took the nation by storm and was all the rage in some circles. A fad which also had a definite military dimension to it. 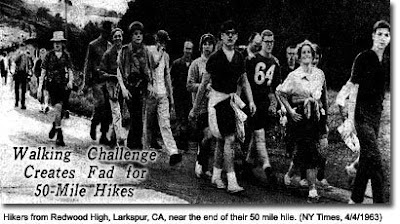 "Kennedy (or someone else in the White House) had discovered a 1908 Executive Order from Theodore Roosevelt that all Marines should be able to cover 50 miles in three days and for the last half-mile double-time 200 yards, rest 30 seconds; double time 200 yards, rest 30 seconds and sprint the last 200 years to the finish line as proof of their fitness. Because the records showed that some officers in 1908 had covered the course in one day, the challenge was to see if the present military were as fit as those of 1908."

"On February 12, 1963, 34 officers led by Brigadier General Rathvon McClure Tompkins, 50, limping from an old shrapnel wound, marched all day. The order called for the officers to wear helmets, pistols and a light pack, adding another 25 pounds to carry the distance. The fastest time was recorded by 2nd Lt. Marty Shimek, a long distance runner, who completed the march half running and half walking in 9 hours and 53 minutes."

The fifty mile hike was all the rage in the time of the young, vigorous, athletic President Kennedy!

A fad, however, not totally understood by the lay public. Carried to extremes in a manner it should not have been!?

The criteria for Marine officers to complete a fifty mile hike ONCE PER YEAR was a regulation in effect since 1908, but almost never actually implemented or enforced.

* Over a THREE DAY PERIOD!

* While carrying gear. ["wear helmets, pistols and a light pack"]

A hike - - a march - - of fifty miles is not a problem if done over a three day period? To do the same in ONE DAY is expecting a lot from most people? And to encumber a civilian with an amount of gear as expected to be carried by a Marine officer is absurd!

This sort of stuff got carried away to an extent. High minded idealism in the extreme. To be physically fit and able to hike fifty miles in a single day is not a bad idea, but only FOR THOSE PERSONS PROPERLY CONDITIONED AND HAVING SOME PRACTICE TRAINING AND THE MENTAL WHEREWITHAL TO MARCH [HIKE] SUCH A DISTANCE. Especially if the expectations and desire is to complete the entire distance in one day.

I can only assume that there were a lot of folks who ended up with foot, ankle, knee, or back injuries as the result of attempting the fifty mile hike and not being properly prepared for the ordeal.