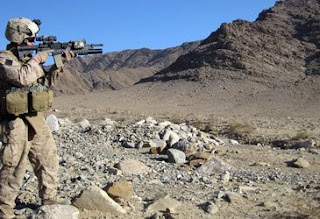 Here is a disturbing headline courtesy of Mc Clatchy:

"Marines newly arrived in Afghanistan are discovering that the tactics they learned in nearly six years of combat in Iraq are of little value in their new war — and may even inhibit their ability to fight their Taliban foes."

Impedimenta slowing down the U.S. forces to include:

Roads, and use that word advisedly, are almost non-existent in Afghan. Those roads that do exist are unlike the semi-well developed road system of Iraq. Afghan roads are mere paths, or sandy, poorly developed dirt trails! Maybe in some areas, maybe many areas, NO ROAD EXISTS PERIOD!!

And the U.S. troop, wearing the fighting load, is too heavily encumbered to be able to keep up with, much less catch the fleet-of-foot Taliban adversary. Especially in mountainous terrain! Your average-everyday-run-of-the-mill Taliban wears the turban, a heavy wool cloak, those pantaloon trousers and slippers, carrying only an AK or a RPG, AND THAT IS THAT!!

For combat Afghan-style, we need the stripped down soldier? Sans kevlar helmet [wear the cloth cap], no body-armor, a minimum of ammo, low-quarter Converse-type canvas sneaker!!??

I would like to see this war become increasingly stripped apart (not just the individual soldier) and go back to what it was in the initial stages of OEF, that is highly trained and highly specialized SF teaming up with the Afghan army and using air power to rat out the tallies.

As I recall from a documentary I saw about Army SF, they operated as 12 man teams at the basic level and lived in very spartan conditions in sparsely constructed operating bases.

Living and working there as a huge army just gives the tallies the impetus to drag it on and bleed us out for years as they have always done to invading armies.

Of course I'm not a military expert or an Afghan vet, but this seems like the right thing to do from what I've studied.