"The Bomber Gap was the Cold War belief that the Soviet Union's Long Range Aviation department had gained an advantage in deploying jet-powered strategic bombers. Widely accepted for several years, the gap was used as a political talking point in the United States to justify a great increase in defense spending."

"On February 15, 1954, Aviation Week published an article describing new Soviet jet bombers capable of carrying a nuclear bomb from their bases to the US. The aircraft was the Myasishchev M-4 Bison. Over the next year and a half, the rumors were debated publicly in the press and soon in Congress." 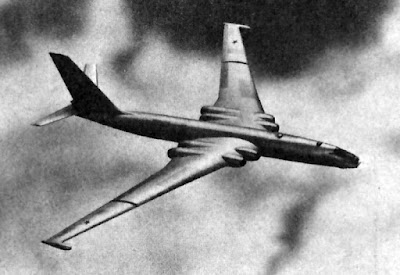 Bison in flight. Four-engine long-range strategic bomber analogous to the American B-52 Stratofortress. Could deliver atomic munitions of the continental United States from bases in the Soviet Union so it was thought. Refueling would be necessary en route? Hundreds of these bombers [estimated about eight-hundred] were going to be rolling off the assembly line in a few years. American intelligence terribly wrong in this regard. Less than one-hundred finally built, their role as a long-range strategic bomber not the real deal. The threat as thought to be major never materialized, threat much less than thought.

Now for the rest of the story and thanks to the tip from the Internet web site English/Russian. 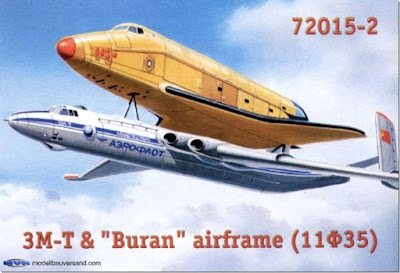 A number of Bison converted to a civilian version, with rather little modification so it seems. This is the VM-T transport aircraft. From apparently a Soviet era poster a VM-T with Aeroflot markings transports the Soviet Space Shuttle piggy-back. 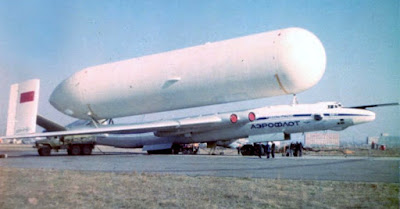 Yet an additional civilian application of VM-T as a special purpose transport aircraft. Long-range bomber Aeroflot conversion with an enormous pod. A container for space booster rockets to be used in the Soviet space program. I guess you have to see the image to believe it. Appears ungainly and not really worthy of flight but obviously the plane can take to the air and operate normally.

Bison finally performing yeoman duty but not as originally envisioned. Long-range strategic missiles rendering the mission of Bison as not  necessary.
The much vaunted and found-to-be-erroneous Bomber Gap subsequently followed by the also found-to-be-erroneous Missile Gap. American intelligence falling face down twice and at a most critical period of the Cold War!!
coolbert.