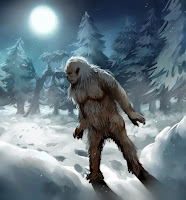 The yeti again spotted [traces or footprints as purported]. The ABOMINABLE SNOWMAN!

High in the Himalaya mountains so it is suspected by some dwells a humanoid like creature. MYTHICAL!

Thanks to the Russian controlled [?] media outlet Sputnik.

"NEW DELHI (Sputnik) – The Indian army has said it has spotted giant footprints that supposedly belong to the mythical creature 'yeti' in the Himalayas."

"For the first time, an #IndianArmy Moutaineering Expedition Team has sited [sic] Mysterious Footprints of mythical beast 'Yeti' measuring 32x15 inches [81 X 38 centimeters] close to Makalu Base Camp on 09 April 2019. This elusive snowman has only been sighted at Makalu-Barun National Park in the past,"

"The yeti, also called the Abominable Snowman, is an ape-like animal that is said to inhabit remote mountainous territories in various parts of the world. While most scientists believe that the yeti is no more than a myth and part of popular culture, others say that it could be a relic hominid that has not yet been discovered."

Indian Army mountaineering party in the Himalaya coming across "tracks" of the yeti? As is reported?

INDIA AND PAKISTAN THEIR GROUND FORCES HAVING THE MOST EXPERIENCE AND EXPERTISE IN HIGH-ALTITUDE MILITARY WARFARE!

Polish POW's during WW2 having escaped the Soviet Gulag also reporting having an encounter with the yeti, traversing the Himalaya en route to British India.