Most interesting! World War Two deja vu all over again but strictly with images!

"DEFENCE OF MOSCOW: TIMES PAST AND PRESENT ON ONE PHOTO [20 PHOTOS]"

"We cannot travel in time and see what was happening many years ago, and we luckily do not see what was happening during WWII. But it will never stop to interest us. We still want to touch the history. On these photos two epochs were connected: war time and present days. In the centre of attention is the defence of Moscow. Look how it was and how it is today."

I recommend this particular article from the Internet web site English/Russian highly, without qualification or reservation. And thank you English/Russian. 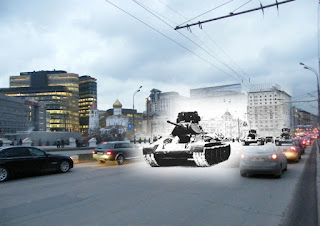 Soviet T-34 tank parades through Moscow, 1941. Same locale, different road traffic in 2012. One of twenty such images. Go see them all!

Peruse at your leisure. Each and every image black and white melded with color. The former as it was in 1941. Color as it is in 2012.

BATTLE OF MOSCOW NOT SUCH A DIRE SITUATION FOR THE SOVIET AS GENERALLY THOUGHT TO HAVE BEEN.

That 5 December 1941 offensive of the Red Army the primary goal of which was TO DESTROY IN ENTIRETY THE GERMAN ARMY GROUP CENTER!!

And nearly did so.