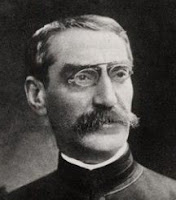 "Clear and hold one spot, then expand to another."

That role of the French general officer Gallieni during the Battle of the Marne [1914] well understood.

That military and combat role of Gallieni in those years prior to the Great War perhaps far more important far less understood:

OIL SPOT. A counter-insurgency strategy found to be effective and as first enunciated and put into practice by Gallieni. Suppression of Vietnamese insurgency during that initial period of  French colonial rule in what became French Indo-China.

"The oil spot approach is the concentration of counter-insurgent forces into an expanding, secured zone. The origins of the expression is to be found in its initial use [?] by Marshal Hubert Lyautey, the main theoretician of French colonial warfare and counter-insurgency "strategy."

THERE DOES SEEM TO BE A DEGREE OF CONFUSION THAT PERSON THE ORIGINAL THEORETICIAN OF THE OIL SPOT STRATEGY.

Rather than Gallieni think Lyautey?

"Lyautey adopted and emulated Gallieni's policy of methodical expansion of pacified areas followed by social and economical development (markets, schools and medical centres) to bring about the end of resistance and the cooperation of former insurgents. This method became known as tache d'huile (literally, 'oil stain'), as it resembles oil spots spreading to cover the whole surface."

Devoted readers to the blog more conversant with the topic let me hear from you.