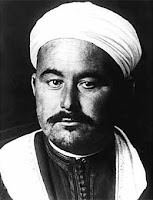 Of this man and the Rif War I was only the most vaguely familiar with.

Abd el-Krim. Berber insurrectionist waging war against the Spanish and French colonial powers. An amateur, indeed, the archetype of the insurrectionist leader and commander able to formulate grand strategy, strategy, operational art and tactics, wage a guerrilla war and do so quite successfully.

"The Rif War was an armed conflict fought from 1920 to 1927 between the colonial power Spain (later joined by France) and the Berber tribes of the Rif mountainous region. Led by Abd el-Krim, the Riffians at first inflicted several defeats on the Spanish forces by using guerrilla tactics and captured European weapons."

"Abd el-Krim (1882–83 – February 6, 1963) was a Riffian political and military leader. He and his brother Mhemmed led a large-scale revolt by a coalition of Berber-speaking Rif tribes against French and Spanish colonization of the Rif, an area of northern Morocco. The rebels established the short-lived Republic of the Rif. Abd el-Krim's guerrilla tactics influenced Ho Chi Minh, Mao Zedong, and Che Guevara."

* Nothing in the early background of Abd el-Krim seems to have prepared him for the role of insurgent and guerrilla leader.

* The Rif War Insurgency only suppressed with the use of massive French military intervention, methods and techniques as employed draconian in nature, including the use of poison gas against civilians.

* Strangely enough too, Abd el-Krim when captured sent to comfortable [?] and prolonged exile not executed or even it seems held captive under excessive duress.

If Ho, Mao and Che all agree that Abd el-Krim the insurgent leader to be emulated, we must do so also? I do think so.