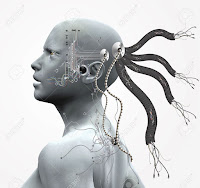 Concluding a series of blog entries extracts with some commentary, items as found at the J.R. Mooneyham Internet web site.

DAY OF THE MACHINES!

* "Only the poorest or most desperate of nations field human beings in direct physical combat now, as machines rule the battlefield."

THAT BATTLEFIELD TO INCLUDE SUBTERRANEAN WARFARE!

* "Yes, the subterranean option is a relatively new one, made feasible by recent technologies and new materials."

* "Basically we're talking underground robotic mini-subs/tractors here, which can tunnel at respectable speeds over respectable distances to attack/sabotage/spy on enemies from beneath."

* "One relatively new and scary weapon in the modern military arsenal now is man-made earthquakes and tidal waves (as well as countermeasures)."

* "Today [2130], even the human beings manning control and communications stations far from any actual combat tend to be cyborgs-- part biological, part machine."

* "Today camouflage/invisibility ranks among the highest priorities in military technologies."

* "Inert/dormant PestX clouds/carpets are increasingly being deployed as covert weapons systems due to their war flexibility and difficulty to detect while dormant."

* "Most truly important battles now are usually fought mostly at sea, under it, or in space or cyberspace."

* "There are LOTS of mercenaries now, using mixes of old and new military technologies, as well as improvisations of other ad hoc choices."

WITH REGARD TO THE TIDAL WAVE [TSUNAMI] WEAPON THE RUSSIAN ALREADY CLAIM THEY HAVE THEM IN PLACE!!

Also, cyborgs for everyone. Such technology is in the embryonic stages of development but is to an extent is now!