"Some damn fool thing in the Balkans"

"Some damn fool thing in Doklam?"

Suddenly and out of nowhere it seems tensions of a geo-political nature between China and India have increased markedly and everyone must sit up and take notice. Yet one more geography lesson for the average-everyday American.

Thanks to the article as seen at Freeper:

"China's warmongery Not an ambassador of peace. The dogs of war are growling and if the India-China-Bhutan standoff in the Doklam plateau escalates, they would soon be upon us. However, even before things come to such a pass, the Chinese media, it seems, is egging on its government to flex its military muscles against India and teach New Delhi 'a bitter lesson'." 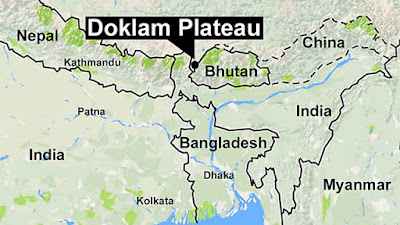 Read further the entire issue of Doklam and the potentiality thereof. India/China/Bhutan and an endless border dispute that seems to be without amelioration.