A pickup truck with a heavy crew-served weapon mounted in the bed. Often that weapon a Dashka Soviet era heavy machine-gun.

1. "U.S. to Give Some Syria Rebels Ability to Call Airstrikes"

"After training, moderate rebels to get pickups with gear to call for American B-1B bombers"

2. "Iran’s Latest Tactic Against Islamic State — Send in the Battle Buggies That’s one way to swarm the enemy"

"Minimally-trained irregular troops can deploy the swift little vehicles to strike and even surround the enemy in an urban environment — like a swarm of insects." 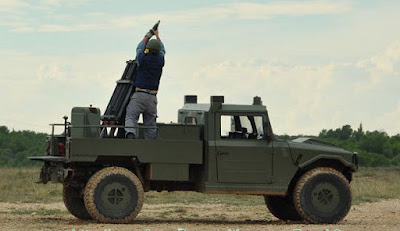 An EIMOS 81 mm mortar. The total package. That mortar having built-in recoil mechanism.

Further according to the wiki and regarding the Toyota Hilux pickup truck and the suitability of same as a technical:

"Due to its durability and reliability, the Toyota Hilux, along with the larger Toyota Land Cruiser, has become popular among militant groups in war-torn regions as a 'technical' . . . the Hilux is 'the vehicular equivalent of the AK-47. It's ubiquitous to insurgent warfare'."

Suddenly everybody wants a technical. Barkeeper, technicals for everyone!!