Continuing with that discussion of the American light carrier.

THE SUPER-CARRIER [CVN] AS THAT TERM UNDERSTOOD TOO VULNERABLE AND EXPENSIVE? "

Ten or nineteen. That is the question?

And the answer is? CVL?

"Last week [April 2014] the U.S. Navy accepted USS America, first of the America-class amphibious assault ships, into service . . . When fully operational, America and Tripoli will operate as many as 20 F-35Bs, potentially playing a critical role in what the Navy projects as the future of air superiority." 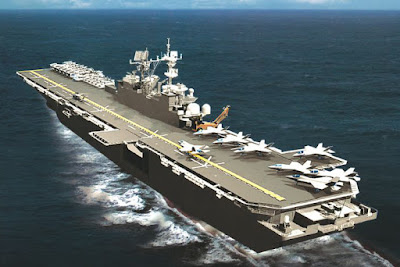 An image of the USS America [LHA (R)] as might soon be. Carrying F-35 B Lightning, short take-off vertical landing.

THE AMPHIBIOUS ASSAULT SHIP AS IN THE CURRENT INVENTORY DEPENDING ON MISSION AUGMENTING IN A MAJOR WAY THE SUPER-CARRIER. THOSE OTHER NINE AIRCRAFT CARRIERS IN REALITY U.S. MARINE ASSAULT SHIPS?

A Wasp-class amphibious assault ship that number and type of warplanes fixed and rotary aircraft  task tailored. Missions to include the "Standard Complement", "Assault", "Sea Control".

LHA (R) however NOT carrying [?] those embedded and organic warplanes essential to the mission and of the variety:

Assuming also Osprey if and when carried capable of carrying out the aerial logistics mission.

The much talked about Chinese aircraft carrier [solely one at the present time] Liaoning able to carry about twenty-four combat warplanes of the strike mission variety. Liaoning also evidently NOT having organic EW, AEW and tanker warplanes?