The latest report, the situation in and around the airport at Deir ez-Zor nbow going from bad to worse. As seen at and thanks to Freeper.

Dien Bien Phu and Stalingrad deja vu all over again unmistakably so?

"Islamic State fighters have broken through government defensive lines in the Syrian city of Deir ez-Zor, surrounding a military airport and cutting off food supplies for roughly a quarter of a million civilians in what could become a major humanitarian disaster. Deir ez-Zor in eastern Syria is divided between the militants and the government of Bashar al-Assad. The areas controlled by the government have long been under siege but were sustained by supplies flown in to the nearby military airport and by airdrops from the World Food Programme." 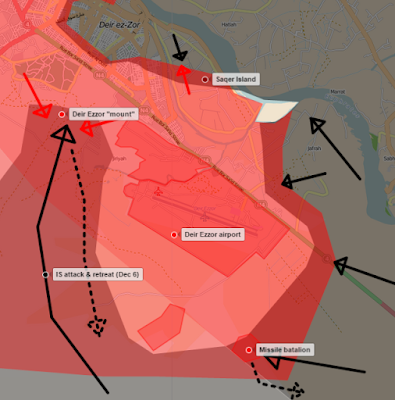 Air-drops and air-lift no longer possible? A quarter-million persons in danger of starvation. for over a year this siege has continued. NOW a calamitous finale is in sight?