ONE INDICATION OF AMERICAN DECLINE IN THE WORLD WILL BE FOR THE JAPANESE TO CONSTRUCT A BLUE-WATER [PELAGIC] NAVY!!

A pelagic [deep-water] navy with an offensive capability and this through the light carrier?

F-35B STOVL warplanes flying off a light carrier of the Izumo class?

Izumo as classified a helicopter-destroyer and as of this exact moment not having an organic fixed-wing combat warplanes!

A FEW SIMPLE MODIFICATIONS HOWEVER AND THE IZUMO READY TO GO?

"If the Izumo class were to operate fixed-wing aircraft [F-35B], they would be limited to those capable of STOVL (short take-off, vertical landing) operations . . . the ship's lack of a ski jump limiting the plane's range and payload, lack of specialized landing pads to withstand the F-35B's immense heat generated upon vertical thrusts, and small space to accommodate very many planes would make it a poor 'offensive' aircraft carrier" 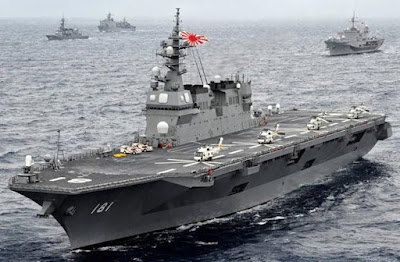 Japanese Izumo class warship. Carries at this exact moment only rotary-wing warplanes, submarine-hunters. CAN with modifications also employ the F-35B in the STOVL mode? This is the question?

Regarding the F-35B and the STOVL capability of same:

The Izumo will make for a "poor" light carrier and then only with extensive [?] modifications nonetheless providing a hitherto missing element to the Japanese Self-Defense Forces naval capability.