More on an item that has been the subject of a previous blog entry.

From the Russian Internet web site Sputnik and as reported that situation of Israeli troops having their personal smart phones hacked more acute than first realized?

THE CULPRIT HERE BEING A MALWARE OF AMAZING SOPHISTICATION!

A state actor at work here and not the smurfs?

"New research has revealed that state-sponsored hackers have been using malware to spy on soldiers in the Israeli Defense Force through their smart phones."

"Reports indicate that more than 100 Israeli servicemen were first affected by this attack this in July 2016, and that the most recent reported attacks happened just this month. The malware, called "ViperRAT," was specifically designed to target Android devices, with hackers gaining access to the phone’s location, video, audio and SMS functions."

"YeeCall Pro and SR Chat are legitimate programs, but were weaponized for the cyber attack. The virus spread through “Droppers” hiding in other apps common in Israel and available through the Google App Store, like Move To iOS and an Israeli love-song player"

"The depth of social engineering that went into the hack led Kaspersky to posit that Hamas was responsible, but Lookout has claimed that the group does not possess the sophisticated mobile capabilities to develop a program like ViperRat." 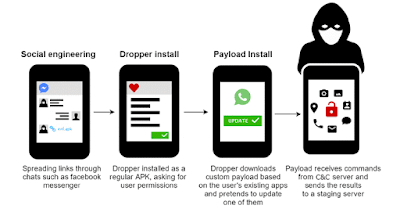 Also see and read this analysis from Lookout as to the threat as posed by ViperRAT!