NOT forgotten this blog entry from almost six years ago now.

The significance of which cannot be minimized when taken within the current Ukraine context.

"Here is another Russian-speaking area, Moldova/Trans-Dneister, not contiguous to the Russian 'motherland', where we may see future agitation and strife. Conflict leading to military action on the part of the Russian. An embattled and 'mis-treated' Russian minority, desiring succor and eventual reunification with 'Big Brother' in Moscow?" 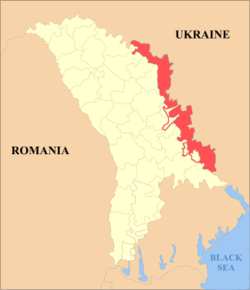 Moldova sandwiched between Romania and Ukraine. That area in red along the Dneister river the population of which predominantly Russian-speaking.

A conflict having the potentiality of the proverbial "civilizational clash". Language, history, and religion! A volatile and dangerous mix.

Moldova/Trans-Dneister NOT having a contiguous border with the Russian Federation. BUT having a large and restive Russian-speaking population.

That Russian-speaking populace of Moldova/Trans-Dneister concentrated too, that area along the Dneister river predominantly Russian ethnics. Where there is concentration of focused energy there is strength!

Rumania I bring to your attention a constituent member of NATO!