Here with some images of a recent visit to Bent's Old Fort.

A civilian mercantile enterprise but built with a definite military application in mind.

That reconstruction now a National Historic Site and worth visiting for those in the area of La Junta.

Bent's Old Fort seen from the approach, a two-story structure with thick walls and not a wood stockade. That is an occupied graveyard in the foreground. Those cottonwood trees in the far background on the banks of the Arkansas river. North side of the river circa 1829 American territory. 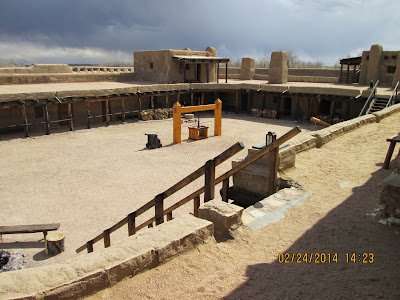 Inside of the fort from one perspective. The replica built on the same location as the original and constructed of 3 million adobe bricks plastered on the outside. Also the dimensions known with a unprecedented exactitude and preciseness. As measured by an American military officer during a convalescent period, records still existing. Most remarkable. 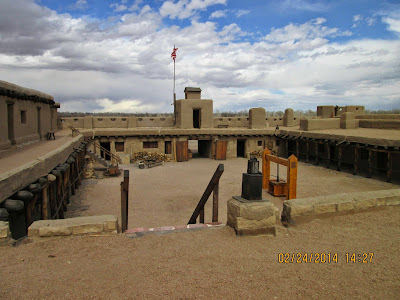 A further image that interior of the fort from another perspective. Battlements having loop holes built into the construction for riflemen. From the ramparts also defenders could avail themselves of  a cannon, a two-inch swivel gun.

And a refuge from "hostiles" if necessary.