Thanks to the Daily Mail online and the tip from Freeper we have news of the SR-72. Alleged American spy plane.

Manned or unmanned? A drone for surveillance and high-altitude high-speed reconnaissance flights or a combat warplane? NONE of this is clear. And should NOT be!

"Is THIS America's newest top-secret spy plane? Clearest picture yet of mystery aircraft spotted flying over Kansas just weeks after being seen in Texas" 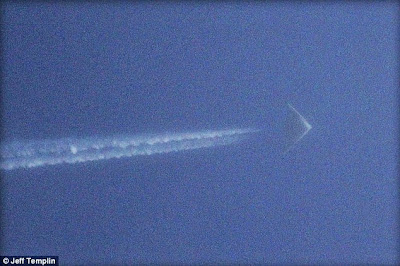 This wedge-shaped object is not hypersonic and cannot cross an "entire continent" in  a hour? More likely the RQ-180 steal recce drone?

"The Aviationist speculates that the plane could be a RQ-180 stealth drone or a prototype of America's next generation long range strike bomber (LSRB)."

NOT operational until 2030? Seems like a long way off.

And those contrails [condensation trails] have got to go! How stealthy is a combat warplane when it leaves a distinct and highly visible trail behind.

Come on folks.. think about it. If it is not a United State Air Force craft.. then what else is it...

1) Alien craft? Yeah right.. they cross light-years of space to fly a jet aircraft over the US.. not likely.

2) Russian.. I don't see any interceptors shooting this one down.. and its in the Mid-west.. ah I can't see it being so called russian.

So what it really is clearly a secret combat aircraft we again are not told about.. so the photo proves it.. and the USA denies it.. and yet when they get asked about UFOs and Aliens.. that also say no.. and most of the people believe that answer as true as well.

What is funny is its close to Kenneth Arnolds 1947 sighting in the physical descriptions.

Well good luck.. and may the true bless us with its presence