From that era of the Second World War [WW2] here was a new one on me.

Called an assault drone. Remotely [unmanned] piloted naval aviation combat warplane [drone] launched from an aircraft carrier. Multi-engine and given the technology and reliability of same at that moment in time state-of-the-art. 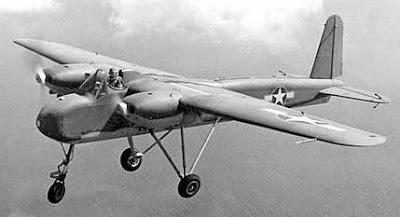 This version of the TDN-1 has a cockpit with pilot. That was a research and development feature only. The deployed drone in production stage of course not needing a pilot.

"The Naval Aircraft Factory TDN was an early unmanned combat aerial vehicle - referred to at the time as an "assault drone" - developed by the United States Navy's Naval Aircraft Factory during the Second World War. Developed and tested during 1942 and 1943, the design proved moderately successful, but development of improved drones saw the TDN-1 relegated to second-line duties, and none were used in operational service."

"The development of the radar altimeter and television in the early 1940s made remotely guided, bomb- or torpedo-carrying aircraft a practical proposition"

"the TDN-1 project, with the aircraft being designed to be capable of using either television or radar as its guidance system. Constructed mainly from wood, the TDN-1 had a fixed tricycle landing gear, and could be fitted with a conventional cockpit in place of its guidance equipment for test flights."

Drones too are the future for naval aviation even as we speak? More warplanes [drones] can be produced cheaper in greater numbers and more expendable and better suited for all manner of combat operations?

That super-carrier to be replaced with the "light carrier" and DRONES are a fundamental part of that effort?