"They are not only a silent killer, they also have a psychological effect".

Recall that photo of the Indian MARCOS [Marine commando] with crossbow? From a previous blog entry. An archaic weapon perhaps not so archaic? Definitely NOT so!

Here from Suvorov on the crossbow, the deadliness of same, and the potential use by Soviet/Russian special operations forces [Spetsnaz]!

"In spetsnaz the most up-to-date weapons exist side by side with a weapon which has long been forgotten in all other armies or relegated to army museums. One such weapon is the crossbow. However amusing the reader may find this, the crossbow is in fact a terrible weapon which can put an arrow right through a man at a great distance and with great accuracy."

[AND IS NOISELESS, AS COMPARED TO EVEN A SILENCED OR MUFFLED FIREARM!!]

"that noiseless action is exactly what spetsnaz needs today. The modern crossbow is of course, very different in appearance and construction from the crossbows of previous centuries . . . It is aimed by means of optical and thermal sights . . . The arrows are made with the benefit of the latest research in ballistics and aerodynamics. The bow itself is a very elegant affair, light, reliable and convenient To make it easy to carry it folds up."

Crossbows, the modern version, ARE a deadly weapon! Advancements in technology, cranking devices to "cock", optical sights, bolts of ingenious variety for killing [the "arrows" fired from a crossbow are technically referred to as a "bolt"!!], high-tech material for stock, etc. All make for a deadly combination. The recurve variety is the crossbow of choice for the military?

"Recurve crossbows are still used by elite military organizations when stealth and accuracy are required for assassination missions." 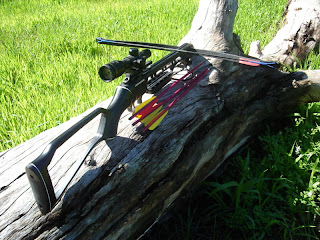 AND SILENT TOO!! Especially useful for special operations units when stealth is a factor!

And from the wiki entry on crossbows, we find:

"Indian Navy's Marine Commando Force were equipped until the late 1980s with crossbows supplied with cyanide-tipped arrows, as an alternative to suppressed handguns."

NO! This is a violation of the Laws of Land Warfare! Using poisoned weapons in this manner is illegal!

In fact, the militaries of a whole host of nations in addition to the Soviets/Russians and Indians still use the crossbow to some extent. Militaries to include: 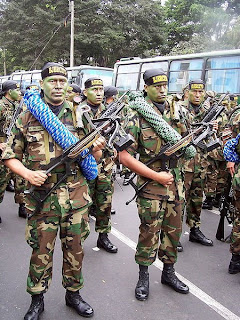 The above photo shows Peruvian troops with crossbows. Those objects carried diagonally across the body in the manner of a haversack are ropes for a zip-line!

"A zip-line (also known as a flying fox, zip wire, aerial runway, aerial ropeslide, death slide or tyrolean crossing) consists of a pulley suspended on a cable mounted on an incline."

i dont know if you read comments

but crossbow is not used by marcos any longer.

the photo you put up is about 20 years old i believe.

now they are equipped with silenced pistols.

This analysis has been entirely ripped from an outdated Wiki page which in turned was ripped from research carred out on survivalistboards.com. Either is a much better resource than this page and it is deplorable that this comes in at no 1 under military crossbow google search.

Crossbows are 88% as noisy in firing as a rifle, the only reason the rifle is louder is because of the sonic crack. Crossbows kill by bleeding to death their victims and when you are bleeding to death, you are going to SCREAM. The crossbow, especially a compound one, is not a weapon that you would want to use.

Getting hit by a sniper with a crossbow can be devastating psychologically. I total agree. The crossbow is a killing machine but not very practical in today's war climate. www.crossbows4less.com

Regardless of the age of the photo, the modern crossbow is still used in the military today either by trained specialists or by individuals who like the fail safe of having one. The reason being is if you have an enemy that is heavily laden in Kevlar armor a bow is actually the better weapon. https://www.youtube.com/watch?v=1nLRymWv-CA

Arguments against crossbow go way back to the dark ages when military leaders swore by the long bow.

I am happy to read your article.
I get more information through this article.
Thank's very much!
check here

Super article that you have included good idea, thanks