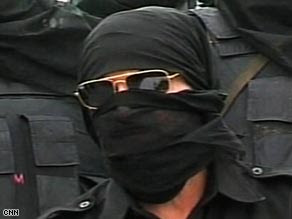 "We are not fit to lead an army on the march unless we are familiar with the face [terrain] of the country [hotel] . . . we shall be unable to turn natural advantages to account unless we make use of local guides." - - Sun Tzu.

Here is the photo of the a man purported to be the commander of the Black Cat commando that stormed the Taj Mahal hotel in Mumbai. Eradicated the two terrorists and saved hundreds of guests, but only with the utmost of difficulty.

This commander, masked, with bandanna and sunglasses to conceal his identity, spoke passable English when interviewed for the television, and was pretty forthright in his description of the problems faced by the good-guys!!

There HAS BEEN A LOT OF RECRIMINATIONS WITHIN INDIA OVER THE WHOLE MANNER WITH WHICH THE MUMBAI ATROCITY WAS HANDLED!! Too little too slow, ineptness and clumsiness on the part of the authorities, etc.

It took 33 hours to find and kill the two terrorists hold up in the Taj Mahal hotel. Even Black Cat could not get the villains without the utmost of difficulty!!

My sense of it all is that Black Cat, the men on the ground, even the higher echelons of command, did the best they could in an almost impossible situation. The Indian Black Cat commando is not inept or inefficient. Black Cat just faced a whole host of problems that there was not an easy answer to.

[my own perception is that Black Cat ranks right up there with the finest anti-terrorist units in the world!]

Here from the interview with the commander of Black Cat some interesting extracts!

I think that for the average-everyday-person, it is incomprehensible that a highly trained commando anti-terrorist force took 33 hours to clear the hotel of the two terrorists and save the 200 folks trapped inside!?

"The sound of gunfire and explosions reverberated throughout the hotel's atrium, making it impossible to pinpoint the origin of the shots."

"Some tourists rescued from the hotel said the building's large dome and a massive atrium made the sounds of gunfire and explosions reverberate endlessly. It was impossible to pinpoint where the shooters were."

Right, this hotel was eight stories tall, and had a large atrium with a dome at the top. The sounds of gunfire from both the terrorists and the rescuers was deafening and echoed "endlessly". Pinpointing the direction from which the shots of the bad-guys came from of itself made the job of the commandos that much more difficult.

"'We did not know the layout of the hotel,' the commando told reporters. 'There was one person on the hotel staff who was helping to guide us around.'"

"'The attackers had a clear advantage', commandos said, 'because it was apparent from their movements they knew the hotel's layout.'"

The villains seem to have been intimately familiar with the insides of the hotel! The area consisting of the rooms, hallways, etc., OCCUPIED BY THE GUESTS, and that area called the SERVICE AREA as well. The latter constituting the remainder of the hotel off-limits and unseen to the guests. Needed for the proper operation of the hotel. Lifts [elevators], hallways, kitchens, laundry, storage spaces, etc. It has been speculated that the terrorists occupying the Taj ACTUALLY AT ONE TIME WERE EMPLOYED AT THE HOTEL AS PART OF THEIR TRAINING??!! And during the gun battle with the Black Cat, used their knowledge of the hotel layout to their advantage!!

"'Because of the darkness, commandos could not tell how many terrorists were there -- were there many, or only a few who continued to change positions?'"

The hotel was plunged into darkness as all the electricity from the outside was cut off in a deliberate fashion? Maneuver was next to impossible for the commando as they did not know the inside layout. Normally darkness is a plus for an anti-terrorist forces that have at their disposal night-vision or infra-red goggles, with infra-red illuminators as needed! This was not the case with Black Cat?

Imagine trying to move around in the hotel in total darkness, not knowing the layout, where the terrorists were, the place on fire the whole time, not equipped with advanced gear, etc.!!

"Commandos had to avoid hurting civilians, convince them they were not terrorists"

"During the three-day assault, the attackers fired indiscriminately. But the commandos were forced to use caution."

"'Let me tell you one thing,' the commando said. 'Within the first exchanges of fire, we could have got those terrorists -- but there was so many hotel guests -- there were bodies all over and blood all over. And we were trying to avoid the causalities of civilians. We had to be more careful in our fighting.'"

"'There are a number of rooms that are locked from inside,' he told reporters. 'It is possible that some of the hotel guests have locked themselves in and for their own security and safety. Even though we have identified ourselves they are not opening the doors.'"

The terrorists are playing by their rules [no-holds barred], the Black Cat had to play by the established rules of engagement, and ATTEMPT TO LIMIT INNOCENT CIVILIAN CASUALTIES TO A MINIMUM!
Those civilians, trapped in a room, having barricaded themselves inside, became hostages, even WHEN NOT ACTUALLY IN PHYSICAL CUSTODY OF THE TERRORISTS! Black Cat had to assume that behind each locked door was a potential terrorist, the use of force EVEN THEN HAVING TO BE KEPT TO A MINIMUM!
And the commando had to assume the presence of booby-traps and demolitions, timed or otherwise, was a possibility. The normal manner of clearing a hallway, room, or floor was too risky! Grenades, flash-bang, concussion, fragmentation, moving along with sub-machine gun fire clearing the way was out of the question!!

Black Cat did the best they could, under trying circumstances. NO ONE ELSE could have done it better??!! I think NOT!

This is BULLSHIT! his is not a black cat commando. This soldier is part of MARCOS - Marine commandos.

this is a marcos