Here the Indian Army and Navy units, commandos, that responded to the terrorist attacks in Mumbai. 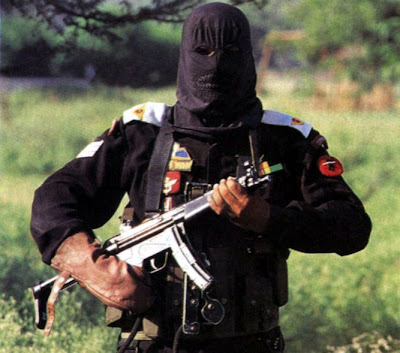 "Of the 1,200 commandos, some 100, formed into small teams specialising variously in kidnap, hostage, hijacking and other anti-terrorist emergencies are on duty round the clock - ready to go within minutes of receiving a summons."

Described as: "They are 14th century warriors fighting a 21st century war," NOT possessing the refined and sophisticated equipment as other counter-terrorist units would have at their disposal.

The unit has gained a fearsome reputation among nervous terrorists and are variously referred to as the Dadiwali Fauj (Bearded Army) since MARCOS are the only non-Sikh personnel allowed to grow them, Jal Murgi (Water Hens) for the speed in which they assault from the water and Magarmach (Crocodiles) for their amphibious capability.

This particular MARCOS man has a cross-bow as part of his weaponry!!

Both Black Cat and MARCOS units were involved in the Mumbai operation? News accounts seem to suggest so. These units did not, however, arrive on the scene until nine hours after the terrorists began their attack. Central "command" in Delhi [??] only decided to use the commando units two hours after firing had started. At that point, the situation was well out-of-hand!

These commando units quite often go into battle MASKED!? The one MARCOS man [the commander] being interviewed, [speaking passable English], wore a head bandanna, a mask, and sunglasses, totally concealing his face.

"NOT possessing the refined and sophisticated equipment as other counter-terrorist units would have at their disposal."

Well, they do have sub-machine guns, hand grenades, cross-bows. What more do you need! These counter-terrorist operations do not normally involved heavy weaponry but rather are close-quarters battle fighting, sort of like the trench warfare of World War One [WW1]. Additional equipment for the Indians would be a hindrance?

There were logistical difficulties in transporting MARCOS commandos to the scene of the Mumbai attacks. However, do not underestimate this force. They are trained for defeating conventional armies and in appropriate theatres confer a lethal force multiplier effect. Look at their deployment record in Kashmir, Maldives.