Here is an Englishman, who, only today, has been found guilty of espionage. A crime, that in war time, carries the punishment of death!

Actually, too, not exactly an Englishman. An Iranian national, a naturalized British citizen, going by the name of Daniel James. [born Esmail Mohammed Beigi Gamasai in Tehran] 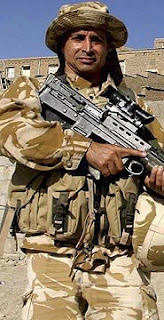 Deployed [the man was a corporal in the British TA [territorial Army, reserve forces]] to Afghanistan, was the interpreter for the British general who commanded the NATO Forces currently engaged in combat with the Taliban.

"The unmasking of an Iranian spy who was working as a British general’s personal interpreter has become an embarrassing espionage fiasco raising questions about the screening for sensitive military posts."

"Corporal Daniel James, 45, who had been security-vetted to work alongside General Sir David Richards when he was commander of Nato’s International Security Assistance Force (Isaf) in Afghanistan in 2006"

Was discovered to have been in contact with the Iranian military attache' in Kabul. Exchanging e-mails and phone calls. Had the intent of passing on classified information regarding NATO activities in the country [Afghanistan]!

NOW FOUND GUILTY AND AWAITING HIS SENTENCING. I assume he will not be given death. The EU nations now totally eschew the death penalty, even for treason in a time of war.

This guy was really a weird bird. Had some strange behaviors that did not impede his getting a very high level [?] security clearance. Just to be in company with such a high ranking personality as General Sir David Richards meant that while performing translation duties, HE HAD TO BE PRIVY TO SOME IMPORTANT SECRETS!?
"Spy suspect Daniel James says he used voodoo to protect general"

"The army interpreter accused of spying for Iran while serving in Afghanistan told the Old Bailey yesterday that he was a voodoo priest who had used black magic to protect his military boss from the Taliban in 2006."

". . . he had been trained as a voodoo priest on one of his many trips to Cuba and told the jury: 'Black magic is not bad.'"

That part - - about many trips to Cuba - - during which he trained as a voodoo priest! He did not - - come to the attention of the Cuban intelligence service - - the DGI!!?? An Englishman, presumably not totally stable mentally, making repeated trips to Cuba, and, who was a serving military man [even as a reservist], would be a prime candidate for recruitment!!

This guy - - maybe all the time, was working for someone other than the Iranians?

Maybe I am paranoid, but my intuition tells me that Five [MI5] and Six [MI6], should be looking at that angle also!