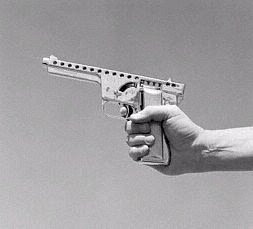 This is coolbert: Here is a weapon originally developed from way back when in the Vietnam War era. The MBA Gyrojet pistol. Had the appearance of a conventional pistol but was much more! Caused a mild stir and interest at the time. Was evaluated by the U.S. Army but found to be "lacking". A revolutionary concept in that the pistol fired A ROCKET!!

"The bullets were for all practical purposes small rockets that started a powder burn upon firing, and constantly accelerated until it reached the target, giving smaller ammo the hitting power of a much larger caliber."

"the MBA Gyro-Jet pistol made for a brief span from 1966 to 1969. It was a stamped sheet metal gun resembling a cheap cap pistol more than a deadly firearm. Early versions fired a 13mm projectile, later reduced to 12mm in order to comply with 1968 Gun Control Act. The self-contained projectile, like a mini rocket ship, had either two or four nozzles to vent the gas and provide recoilless propulsion."

"the Gyrojet used multiple angled exhaust ports to spin the projectile as it traveled thru the smooth barrel. this produced great accuracy" 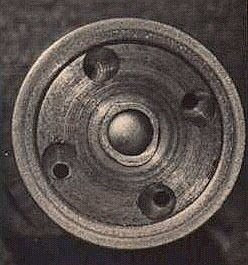 Those angled exhaust ports spun the projectile as it traveled down the smooth bore barrel and toward the target upon exiting, continuously being spun the entire way until impact!

A pistol, firing a rocket, that seemed to hold great promise. Had a number of significant advantages over the standard .45 ACP auto loading pistol as issued to U.S. troops at the time. Advantages to include:

* Recoilless. [very little at any rate]

* Much muffled report. [the "bang" made by detonation is compared to the opening of a can of soft drink?]

* Very long effective range. [reputed to be up to 100 meters]

* High-velocity meant greater lethality at longer range. [even came in an armor piercing round]

But had some significant drawbacks also. To include:

* "misfires or not getting a 100% burn was a problem" [in humid weather] [described though as an infrequent problem].

* "fouling of the exhaust ports." ["a fouled port could cause a wobbling path and nasty accuracy problems."]

* "the rocket burning could leave a trail back to the shooter." [this was the biggest drawback of them all?]

* "clearing a jam or reloading a Gyrojet pistol during a fire fight was impractical."

Perhaps the most glaring disadvantage, at least to my way of thinking, was NOT the smoke [?] trail leading back to the shooter, but rather the non-lethal aspect at close-range. The rocket, when exiting the muzzle, did NOT have sufficient velocity to be deadly to a human! You would hit the guy, but not kill him! Considering that 50 % of all gunfights where a handgun is used occur at a distance of 2 meters OR LESS, and you see the drawback to the MBA Gyrojet right away!!

The MBA Gyrojet was an interesting and novel concept. Perhaps too far ahead of curve to ever be adopted? What already exists, the .45 ACP pistol [today the 9mm Beretta] is just too well a known a product to be cast aside instantly for an alternative you are just not sure about?