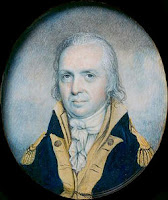 Within context of the previous blog entry consider that the Battle of the Little Big Horn [1876] small potatoes in comparison with Frenchtown and St. Clair's Defeat.

"The Battle of the Little Bighorn . . . was an armed engagement between combined forces of the Lakota, Northern Cheyenne, and Arapaho tribes and the 7th Cavalry Regiment of the United States Army."

Casualties among the American military present at Little Big Horn:

* 268 killed, 55 wounded (6 of whom later died of wounds). Number of U.S. troopers killed at the Little Bighorn in totality, including but not limited to those with G. A. Custer.

Additionally and thanks to a CIC entry by Professor Al Nofi as seen at the Internet web site Strategy Page:

"Little Turtle [American Indian commander with Blue Jacket during the battle know as St. Clair's Defeat] inflicted more casualties on the United States Army than any other Indian war chief. In just two battles, traditionally known as 'Harmer’s Defeat' and 'St. Clair’s Defeat,' he [Little Turtle] slew some 820 American soldiers. In contrast, the best that all the great warrior peoples – the Apache, the Sioux, the Cheyenne, the Nez Perce, and all the rest – west of the Mississippi could do in some 940 fights with the army between 1866 and 1892 was to kill about 920 boys in blue, only about 12-percent more than Little Turtle had accounted for."

I might very well suspect that more troops killed during a thirty year [1862-1892] period on the American frontier by a kick to the head from a horse or fell off their horse and broke their neck than killed-in-action during combat with the American Indian.