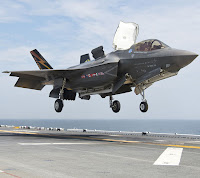 V/STOL: A vertical and/or short take-off and landing aircraft.

Success!
﻿
Thanks to the item as seen at the Internet web site Strategy Page.

"November 22, 2019: The U.S. Navy recently conducted more extensive tests of operating F-35B vertical take-off and landing aircraft from amphibious ships that normally operate helicopters from their flight decks. This test included the navy’s first (of at least three) 45,000 ton LHA amphibious ships. These are the largest amphibs the navy has ever built and can handle up to twenty F-35Bs. For this test the LHA-6 America had 13 F-35Bs on board. Currently, the marines only have 70 of the 340 F-35Bs they will eventually get so obtaining 20 of them for a test was not possible. The two week test at sea was mainly to determine if the LHA and F-35Bs could operate together as a unique type of light aircraft carrier."

* VSTOL the main problem during combat operations is limited range of the warplane. VSTOL operation very fuel consumptive. As is noted in the article however these AAV warships uses turbine power and the same fuel as the aircraft, so that is a plus.

Depending on who is doing the counting at any given moment the U.S. Navy has a dozen to twenty aircraft carriers. F-35B does make a big difference.