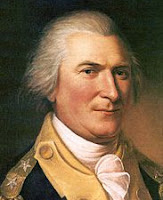 Worst American military defeat of the War of 1812.

This was a new one on me. Thanks to the tip from Lee.

"The Battles of Frenchtown, also known as the Battle of the River Raisin and the River Raisin Massacre, was a series of conflicts in Michigan Territory that took place from January 18–23, 1813, during the War of 1812. It was fought between the United States and a British and Native American alliance near the River Raisin in Frenchtown"

FRENCHTOWN ONLY POSSIBLY SURPASSED AS AN AMERICAN DEFEAT IN TOTALITY BY "BATTLE OF A THOUSAND SLAIN" FROM THE NORTHWEST INDIAN WAR. ALSO KNOWN AS ST. CLAIR'S DEFEAT.

Again and prior to Frenchtown another American military force of approximately 1,000 troops annihilated almost to the last man. Washer-women as accompanying the troops also counted.

FOR THOSE CAPTURED THE EXECUTION FIRES BURNED FOR TWO DAYS!!

Hey, nobody said any of this was going to be easy, did they?