Continuing and concluding the topic the desecration of war memorials.

MEASURES AS TAKEN TO PREVENT VANDALISM TOO EXTREME FOR SOME?

"WA: Port Angeles Mayor receives Pushback over Attempt to alter War Memorial. The replica Liberty Bell in the Veterans Memorial Park in Port Angeles,  Washington, was installed as a private initiative in the bicentennial year of 1976. For several years, the replica and the park have been subject to vandalism." 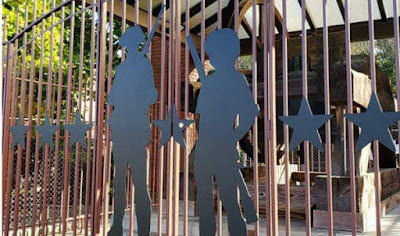 Silhouette images of American Revolutionary War soldiers guarding a replica of the Liberty Bell. The memorial [a private concern] enclosed by a fence. Someone takes exception to this? And the fear or offense  is what exactly?

And alteration is suggested? And what alteration would be acceptable? None I suspect. Again, persons objecting to these sort of monuments and beyond even the mere monument itself terribly troubled persons with grave mental issues. Heavy pharmaceuticals required to manage their awful and overwhelming condition.