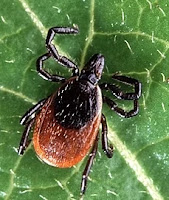 To war with tick. Bio-warfare.

Thanks to the article by Jennings Brown courtesy Gizmodo.

"Some members of the United States House are concerned the Pentagon may have unleashed disease-infected ticks that caused the spread of Lyme disease."

"Roll Call reports that on July 11, the House stealthily decided via voice vote to support an amendment to the 2020 defense authorization bill that would require the Department of Justice look into weaponized ticks."

ALLEGED FIELD TRIALS OF TICKS USED AS VECTORS FOR BIO-WARFARE DELIVERY CARRIED OUT BETWEEN 1950 AND 1975. USING A NON-LETHAL BUT DEBILITATING ILLNESS, LYME DISEASE.

I can tell you with a pretty good degree of certainty what this is. Bio-warfare agents being tested using ticks as a vector. Lyme disease debilitation but not fatal for healthy persons used as the agent. A disease as I have said debilitating but not fatal. AT LEAST FOR NORMAL AND HEALTHY PEOPLE.

But might be fatal for those with a weakened immune system or suffering sickness.