Thanks to the tip from a Finnish reader to the blog some info on tanks of the inter-war era [WW1 & WW2] possessing multiple turrets.

I was aware that these armor designs existed but not in such numbers. Seems having armor [tanks] with multiple turrets was all the rage at one time.

A design feature [multiple turrets] at least antiquated and felt to be passe' from 1939 onward.

Merely for the Soviet Union alone among the world powers we have these versions of tanks all with multiple turrets:

1. T-100. "The T-100 tank sported two turrets placed on a long chassis. The front turret, mounting a 45mm antitank gun, was placed at a lower elevation than the other, and as such had a limited area of fire. The top turret, mounting a 76.2mm gun, was able to turn a full 360 degrees."

2. SMK. "The SMK's armament was a short 76.2 mm gun in the upper centrally placed turret and a 45 mm weapon in the forward turret." 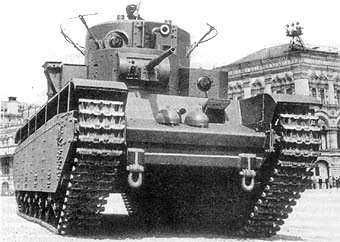 T-35 with five turrets. NOT all so readily discernible in this image! 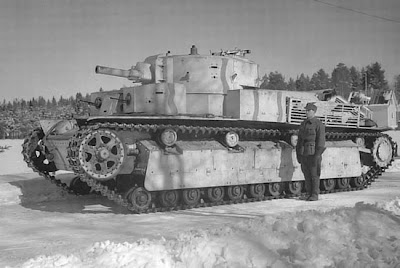 T-28 tank those two turrets located forward of the main gun able to traverse right and left independently of one another.

Armor design and engineering development in a rapid state of ferment in those inter-war years [1919-1939]. Indeed, a tank mostly at the time of initial production already antiquated by more sophisticated designs on the drawing board or existing as experimental or prototype versions.

"The prototype T-100 tank was briefly tested alongside the other designs in the Soviet invasion of Finland in 1939 without success. It was never put into production, due to the archaic design concept, poor mobility and the availability of a far superior alternative, the KV series."

Thank you, anonymous blog friend.
I'm trying to turn my idea.
You have a very interesting and very diverse site.
I like it.
A good explanation and good pictures.
The Finnish language is just difficult to translate, because we talk about this a bit back to front, as other languages​​.
On the (rich) much the same meaning, the word and the word forms

I like a lot of history.
The older the better.
The war is interesting because it always generates a lot of new innovative ideas and inventions, as well as space technology is making same.