"And so we unite and go forward to where our beliefs lead us, and through the sacrifice of several thousands of 'Okichis of our era' build a breakwater to hold back the raging waves and defend and nurture the purity of our race, becoming as well an invisible underground pillar at the root of the postwar social order... we are but offering ourselves for the defense of the national polity." - - oath of the Japanese RAA staff!!

From the Asahi Shinbun:

"Much of the country lay in ruins, and Japan's war-weary population had more shocks in store from U.S.-led occupation forces that arrived in late August 1945."

"In just one month, ordinary citizens were in a state of 'great shock' over numerous incidents of misconduct and criminal behavior among U.S. soldiers, according to newly declassified documents from the Foreign Ministry."

From my perspective not so numerous but mostly rather petty stuff American soldiers of the Japan Occupation force behaving badly but NOT on a massive and widespread scale. Concerns nonetheless valid, the feelings of the Japanese having to be assuaged and were.

The chances too of a Japanese citizen being attacked and violated by one of his own kind more than likely much greater than having the same crime committed by an American occupier!!

Rape of Japanese women by the American occupying military a source of major concern, the RAA a system of organized brothels catering to the "needs and wants" of that U.S. serviceman.

RAA to a large extent run by or closely linked to the Yakuza, Japanese organized crime.

"The Recreation and Amusement Association . . . (RAA) was the largest of the organizations established by the Japanese to provide organized prostitution and other leisure facilities for occupying Allied troops immediately following World War II. The system that incorporated the RAA was short-lived, lasting just over four months before it was eliminated in January 1946." 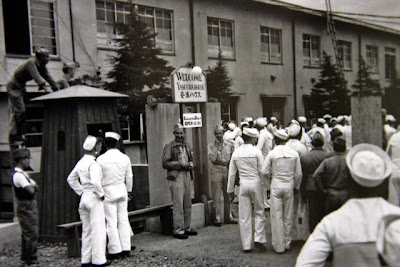 American sailors and soldiers await their turn! Occupation duty in Japan until the time of the Korean War was more or less a dolce vita, the sweet life, one continuous Happy Hour!

That American occupation of Japan and also Germany for that matter rather benevolent and successful, post-war reconciliation and democracy the result, both Japan and Germany quickly recovering from the devastation of war once again counted among the community of nations prosperous, developed and enlightened.