"Five days of hell.
A gentle breeze.
A warming sun."

From the Chicago Tribune today:

Thanks to the article by Greg Jaffe.

"Keeping faith with a fallen hero"

Lt. Colonel Don Carlos Faith Jr. from the era of the Korean War has been laid to rest. Having been awarded posthumously the Medal of Honor [MoH] for his gallant behavior at the Chosin reservoir, November 1950, body only recovered 2004 and ONLY identified this very month, the remains of Colonel Faith buried with ceremony at Arlington, as due a person of his status. 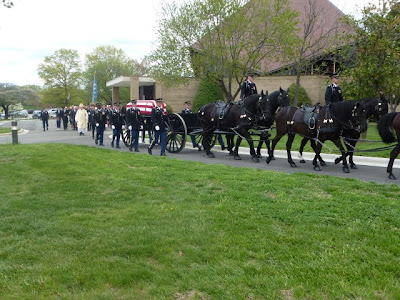 That procession at Arlington, the remains of Colonel Faith laid to rest. In the background left you can see the blue flag standard with thirteen stars emblematic of a MoH winner. Image thanks to Colonel George Rasula.

From that Tribune article:

"For four days, they fought to stay alive. On the fifth day, Faith led his men on a desperate retreat. Enemy troops pounded their fleeing column. U.S. warplanes mistakenly hit them with napalm. Faith charged a Chinese roadblock armed with only a pistol and hand grenades. Shrapnel tore through his chest. He died alone."

Died alone and buried in an unmarked grave, his remains again repatriated in 2004 and just identified this month. Sixty-two years after the fact!!

This account only in part doing justice to the events as they transpired on the east side of Chosin reservoir, November 1950. That U.S. Army Regimental Combat Team 31 [RCT31] moving northward in pursuit of those remnants of the North Korean Peoples Army, RCT31 ambushed by overwhelming numbers of Chinese communist forces [CCF], the situation dire, catastrophe and annihilation of RCT31 a possible.

Colonel Faith having assumed command of the regiment PERSONALLY LEADING TROOPS FORWARD such a senior commander doing so an indication of how precarious the conditions were.

From the citation awarding the MoH to Colonel Faith:

Of those 2,400 men of RCT31 that moved north along the east side of the Chosin reservoir, five days later only 400 emerging alive but hardly unscathed. So intense was the nature of the fighting, the figures speak for themselves.