Some update and info on those North Korean missiles [Musudan] allegedly moved to the "east coast" [Japan Sea/East Sea] AND the American response.

First from Sharkhunters we have:

"The Navy is believed to be operating at least four Aegis-equipped warships near North Korea that are equipped with SM-3 anti-missile interceptors. The SM-3 is a very capable missile that can knock down most medium-range missiles. The ships’ Aegis battle management system is built around a high-powered phased-array radar that is capable of tracking missiles hundreds of miles from the ships, as well as objects in space.  The SM-3s provide protection from missile attacks for areas in Northeast Asia . . . A classified 2009 State Department cable stated that the Musudan intermediate-range missile is based on Russia’s SS-N-6 submarine-launched missile that has a range of up to 2,400 miles.  The missile is fueled by an advanced liquid propellant that is easier to store in missiles than fuel used in other North Korean long-range rockets.  The fuel allows for longer-range missiles and greater warhead capacity on short-range systems."

These missiles are MOBILE intermediate range ballistic missiles [IRBM] that are based on an original Soviet design over forty years old that response and counter to the Amnerican Polaris submarine launched nuclear tipped missile. Musudan developed to a more robust version in the ground launched mode, that Soviet missile tested repeatedly with a great deal of success and apparently very accurate. As launched from a Soviet Yankee class submarine ONLY tipped with a nuclear munition!!

And from the wiki regarding the Musudan:

"The BM25 Musudan, also known under the names Taepodong X, Nodong / Rodong-B and Mirim, is a mobile intermediate-range ballistic missile developed by the Democratic People's Republic of Korea [DPRK] . . . The Musudan resembles the shape of the Soviet Union's R-27 Zyb submarine-launched missile, but is slightly longer." 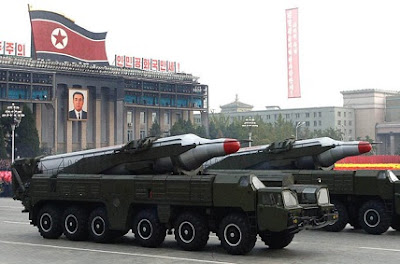 "In the mid-1990s, after the collapse of the Soviet Union, North Korea invited the Makeyev Design Bureau's ballistic missile designers and engineers to develop this missile, based on the R-27 Zyb."

* These are not intercontinental ballistic missiles [ICBM] that threaten the United States mainland.

* Are designed to carry a nuclear warhead and that alone more than likely.

* Those American AEGIS warships with the SM-3 is capable of intercepting and destroying the Musudan? At least in the immediate launch and boost phase they are? NOT so sure about destroying an incoming warhead during the dowward ballistic flight.

10 April is now the date as announced by Kim as the day of reckoning. Devoted readers to the blog hold on to the edge of your seat, we are in for a ride, roller coaster like with a lot of up and down and the light is not yet at the end of the tunnel and we are all spectators. Hang on tight!