This is one big stick in the eye, an unneeded and unworthy provocation.

Thanks to the tip from Jungle Trader and the story as posted on the Internet from RIANovosti.

A blast from the past even!!

"MOSCOW, December 26 (RIA Novosti) – Russia will restart production of railway-based intercontinental ballistic missiles (ICBM), with prototypes to be deployed by 2020"

The  "railway-based intercontinental ballistic missile" the traveling circus of destructive weaponry once abolished under treaty, the development of a new and more potent missile not forbidden. The old missile gone but a new one on the way. That old ICBM the SS-24 Scalpel. 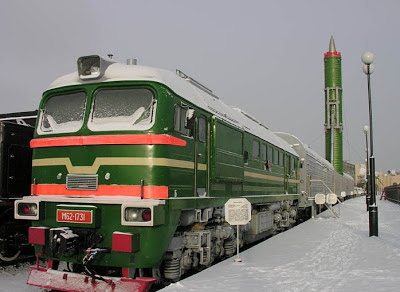 Here is Scalpel is ready for launch, vertical and the countdown has started! Scalpel was cold launch, pops out of that container and then the rocket motor ignites!

"The Soviet military deployed its first missile train in 1987, and had 12 of them by 1991. But by 2005 they had all been destroyed under the START II arms reduction treaty with the United States."

"The original railway-based system involved SS-24 Scalpel missiles that weighed 104 tons, required three locomotives to move, and were so heavy that they damaged railroad tracks." 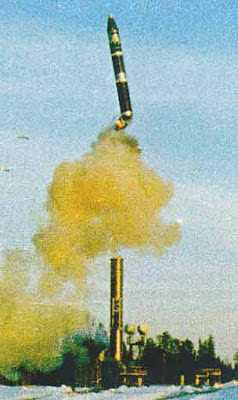 Here a Scalpel has popped out of the container and the rocket motor has yet to ignite. This appears to be a static test site?

NOT a system the railway mounted ICBM that effective? Caused damage to the railroad tracks and too difficult to move around with alacrity. Ground based ICBM in hardened missile silo a far better solution as perceived by the Soviets and anyone else for that matter. A NEW RAILWAY MOUNTED MISSILE MUCH LIGHTER IN WEIGHT AND NOT SO DESTRUCTIVE OF INFRASTRUCTURE?

That Russian NOW already deploying [and for some time now] the TOPOL-M mobile ICBM you would think that enough in this age when nuclear weapons are being dismantled, the delivery systems outmoded and no longer even necessary. Atomic warfare the threat much lessened in the last few decades.

"The only new missile entering service is the Topol-M, or SS-27, and can be either silo based or road-mobile. Deployment has begun with the announcement of the first operational unit, but full-scale entry into service is expected from 2006"

That American atomic cannon from that era of the Cold War and developed initially during the 1950's sop heavy that ONLY a few bridges in the western part of Germany were able to accommodate the weight of the combined cannon and transporters.

B-2 bombers remain on standby! Recall the original purpose of the American B-2 bomber to loiter over the vastness of the Siberian wilderness undetected for extended periods of time, hunting and destroying Soviet/Russian mobile ICBM launchers. Such a mobile launcher as this railway mounted new missile? The need for the B-2 has not diminished one iota? Sad to say it might be so!