Here is the infantry combat fighting vehicle that will replace the Bradley at least by the end of the decade.

Called the Ground Combat Vehicle [GCV] and a joint English-American venture. Called a "tank" but not really a tank.

"BAE Systems has released an infographic outlining the features of its hybrid Ground Combat Vehicle (GCV). A joint venture between BAE Systems and Northrop Grumman with other partners, the GCV proposal is part of a US Army competition to replace the Bradley Fighting Vehicle, which entered service in 1981." 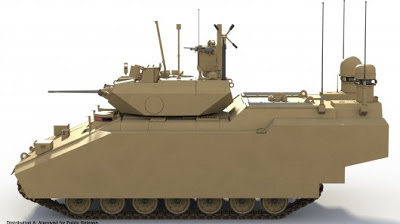 "replace the Bradley within seven years . . . This particular design was created from the ground up and is intended to be upgradable, with a projected service life for the technology of up to 40 years."

A weapons system able to transport troops [squad size] and having organic firepower [some sort of rapid fire cannon]. NO provision made for an organic anti-tank guided-missile [ATGM]?

Improvements over the Bradley to include but not necessarily limited to:

That GCV hybrid design a combination of internal combustion engine, a dynamo and a very robust and powerful electric motor.

"The GCV is propelled by an Hybrid Electric Drive (HED) developed by the partnership."

"This kind of powertrains are used in diesel-electric locomotives and mining trucks. The diesel engine works only as a generator, without driving the wheels, and the electric engine drives the wheels directly."

Bradley as I recall was controversial from the start and thought to be inferior to the Soviet analog, the BMP. We can expect a lot of controversy regarding the design of the GCV too? I think so.