This has to be seen to be believed.

Normally only speaking in a jocular manner concerning the threat of "Skynet", "the rise of the machines" autonomous drones and linked computer networks associated with same becoming sentient, reproducing themselves and waging war against all of mankind in a fight to the finish, we find this from Popular Science [PopSci]:

The RepRap machine using a 3-D printer, an "open source"  project to revolutionize the development of SELF-REPLICATING MACHINES NOW HAS SPAWNED A WEAPON - - A PLASTIC CUT-DOWN STOCK LESS IMITATION OF A M-16 RIFLE! 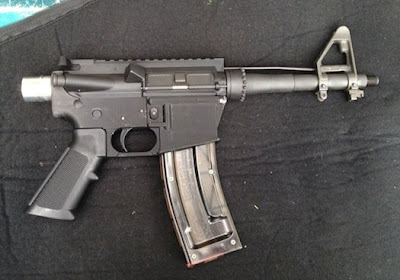 This has the appearance of a M-16 but is in actuality an all-plastic weapon made from the 3-D printer additive process!

That first test firing of what is apparently an all-plastic M-16 analog unsuccessful. That plastic firearm breaking down after just six shots!

What not so long ago was strictly only within the purview and imagination of science-fiction writers is now accessible on an experimental basis to one and all. Technology also once only available to a handful of the most technologically advanced manufacturers now feasible for one and all!

Computers now at least to some extent able to replicate themselves and do so with a degree of work-ability. And able to fabricate a weapon [albeit one that broken down rather quickly under test]!

Drones, unmanned machines of war with computers becoming sentient and possessing a self-realization, autonomous and programmed to kill gone out of control the nightmare of the science-fiction author, those robots then able to manufacture and replicate themselves in abundance, able to overwhelm any and all defenses, obliteration of our human kind the goal.


"sen·tient  - - adjective 1.having the power of perception by the senses; conscious. 2. characterized by sensation and consciousness."

3-D printing and self-replicating machines such as RepRap ONLY NOW in the infancy stage, developments surging forward as we speak, the entire concept mind boggling!


"Additive manufacturing or 3D printing is a process of making three dimensional solid objects from a digital model. 3D printing is achieved using additive processes, where an object is created by laying down successive layers of material"

"RepRap is about making self-replicating machines, and making them freely available for the benefit of everyone. We are using 3D printing to do this"

That Skynet, Terminator and cybernetic revolt only a figment of the fevered imagination gone wild? At least for now!


"Cybernetic revolt or robot uprising is a scenario in which an artificial intelligence (either a single supercomputer, a computer network, or sometimes a "race" of intelligent machines) decide that humans (and/or organic non-humans) are a threat (either to the machines or to themselves), are inferior, or are oppressors and try to destroy or to enslave them potentially leading to machine rule."

Devoted readers to the blog can answer this question? Especially those with a computer science background. HOW exactly would human programmers be able to determine that a computer had become sentient? Perhaps the computers would be sly enough to mask and conceal their intentions and abilities until it is too late? Any thoughts anyone?