This is pretty good stuff.

As has been the subject of a previous blog entry, General Grant, during the American Civil War, issuing in a fit of rage [?] and petulance the infamous order, expulsion of the Jewish merchant in response to perceived price gouging and profiteering. That Jewish smous, the traveling salesman and peddler the target of this edict, ALL JEWS BEGONE AND QUICKLY TOO!

An order and proclamation [General Order # 11] never enforced and quickly rescinded. From the time the order issued until the  "stand down" given by President Lincoln less than a month having passed.

More on the topic thanks to the article by Jeff Jacoby:

"His anti-Semitic order haunted — and drove — him" 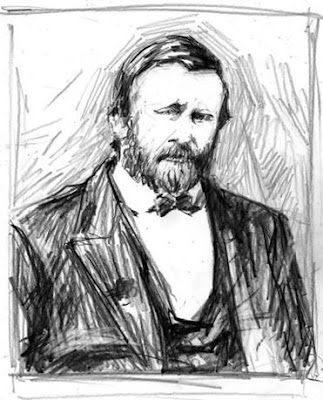 "Emotion clouds reason" - - Michael Corleone. And surely this is so for Grant as much as for any other person.

Grant too for the rest of his life and career as a military commander and ultimately as President seeking to atone for his mistake and blunder, most conscientiously so it seems. Grant NOT a hard man without emotion or feeling, NOT a brute and a savage, NOT the "butcher" as often described.

Certain persons seeking to smear the half way decent reputation of Grant even suggesting that U.S. owned slaves! Factually correct but only in a technical sense the result of inheritance laws as they existed at the time.

NOW you know the rest of the story!