Those itty-bitty specks of rock [Senkaku & Diaoyu] that are currently a point of contention between Japan and China do have a history to them.

In English, called the Pinnacle Islands [eight of them].

NOT merely objects appearing above the water during certain tidal conditions. Pretty substantial island formations, NOT attractive to human settlement however. 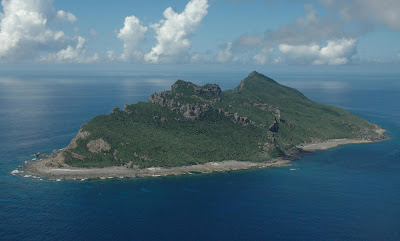 * Are not fit for human habitation? NO source of fresh water?

* Have never had even limited or periodic settlement of any kind?

* Were under the administration of the U.S. military during the occupation and military governance of Okinawa, from 1945 until 1972. Were seen by the U.S. as legitimately an extension of the Ryukyu Island chain.

* Both Japan [more modern times] and China [rather more older times] seem to have claims to the islands that are valid or at least debatable?

Of course, it is not the islands of themselves that are at stake here. Access to the surrounding seabed and the natural gas deposits that are alleged to exist underneath are the motivation for the duelling parties here.

And here with some long-winded and typical ambiguous pronouncements on the subject:

"The Basic View on the Sovereignty over the Senkaku Islands" [Japanese]

"We do believe that, because the Senkaku islands are under Japanese jurisdiction, that it is covered by the US-Japan security treaty. That said, we also stressed that we don't take a position on the sovereignty of the Senkaku islands." - - Clinton spokesman Philip Crowley

And too - - the U.S.-Japan security accord is mentioned. A veiled threat to the Chinese?

This problem is not intractable? Unless someone gets it into their head to establish a permanent presence on one of the islands, fly the flag, a military outpost, etc.! Then it can get rough! Conflicts and disagreements over disputed land have traditionally been a casus belli! A reason to go to war!