"Designed In Israel, Built In America"

"Israel is having a U.S. firm (General Dynamics) manufacture 600 of the new Nemer IFV (infantry fighting vehicle) over the next eight years. The first hundred or so were built in Israel, but the rest can be built more cheaply in the United States"

We have to be clear about this. Manufacturing costs have become such that it is cheaper to build [re-build] the newest Israeli combat vehicle in the U.S. rather than in Israel!!

Merkava, indigenous designed and manufactured tanks, of a variety of "marks" being stripped of turrets, rebuilt in the U.S. [the majority of them will be eventually], "morphing" into the most capable and advanced IFV in existence.

"The Nemer is based on the chassis of older Merkava I and II series tanks. These vehicles are being retired, so they can either be scrapped, or recycled . . . The Merkava lends itself to this kind of modification, because the engine is mounted in the front and there is already a door in the back of the vehicle." 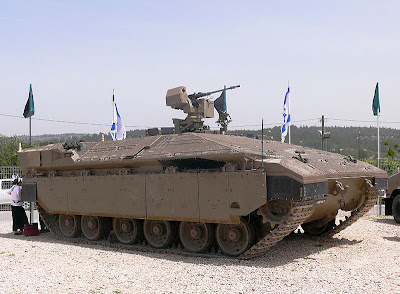 Please note what appears to be a woman on the far left of the photo, standing next to the Nemer. This is a big vehicle and more commodius inside than might be expected.

Troops able to exit from the rear. Very desirable when you are under fire. As it was with the very old-fashioned American M113 for instance. Merkava when conceived was designed to carry a fire team of five infantry - - a rear entry and exit point a must!

Nemer can carry ten troops, commander, driver, a casualty, has weapons capability, heavily armored ["a 54 ton Nemer, the heaviest IFV ever built"] AND is relatively CHEAP at a cost of "about $3 million".

You mean, it is cheaper for the United States to pay to have these vehicles manufactured in the U.S. for delivery to Israel. The government of the Jewish state won't pay a penny for these things.