"'For this launch, we will use a contingency airborne system that will tell the missile to fire.'"

I am reasonably able to infer that this is the Navy E-6B TACAMO aircraft? 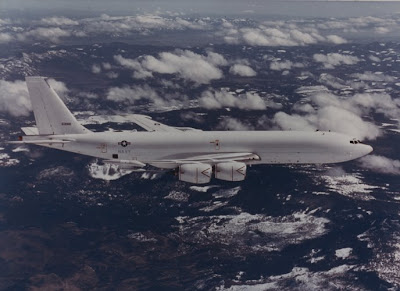 Take Charge And Move Out! [TACAMO] aircraft as painted for the nuclear scenario.

"TACAMO is a U.S. military term meaning "Take Charge and Move Out". TACAMO refers to a system of survivable communications links designed to be used in nuclear war to maintain communications between the decision makers (the National Command Authority) and the triad of strategic nuclear weapon delivery systems"

The USAF fabled Looking Glass aircraft has been replaced by the Navy E-6B. Stratcom [Strategic Command] is now and has been for some time an amalgam of Air Force and Navy nuclear strategic weapons.

That E-6B aircraft, in the case of nuclear war with a hostile foreign power where the national command authority [NCA] has been incapacitated, TACAMO able to take command and order the release of nuclear weaponry!

And through the ALCS, also able to launch silo-based missiles [Minuteman] independently and remotely - - from a distance!