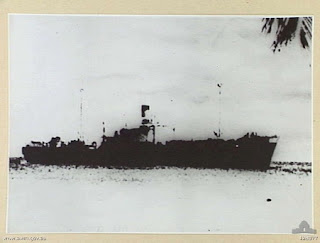 Here is an instance of Soviet World War Two [WW2] collaboration with the German that the modern day Russian probably wants to forget?

Soviet collaboration with the German, prior to 22 June 1941, much to the detriment of the English cause!

The permission, aiding and abetting, for German surface raiders [the Komet] to transit the North East Passage, Arctic waters north of Siberia, gaining access to the Pacific Ocean, the mission of which was to attack English, Australian, and New Zealand targets.

[for a few months during the summer, the Arctic waterway adjacent to the Siberian land mass becomes to a degree open water, allowing for the limited movement of shipping]

"the Soviets agreed to provide Germany with access to the Northern Sea Route [North East Passage?] through which Germany could access both the Atlantic and Pacific oceans."

"Prior to being sent to the Northern Sea Route, the Komet was equipped with a special strengthened bow and a special propeller suitable for ice navigation . . . With the consent of the then neutral Soviet Union . . . With assistance from Soviet icebreaker Lenin [and icebreaker Joseph Stalin also], she passed through the several Arctic Ocean passages . . . In early September, the Komet crossed the Bering Straits into the Pacific Ocean. The passage navigation was an amazing achievement in itself"

Having completed the North East Passage, the Komet, in conjunction with two other German warships [Orion and a re-supply ship], sailing out of Japan, did conduct naval military operations in the Pacific. Most successfully too, posing a constant threat to allied merchant shipping, British, French, and Dutch ruled island domains and the territories of Australia and New Zealand itself!