How many times have we heard this before?

The lost treasure of the Sierra Madre?

In this instance the lost Nazi gold of the SS Minden.

SS Minden has been found??

From the British tabloids from over a year ago now but still an item worthy of consideration.

1. "British treasure hunters caught hunting for the wreck of a 'Nazi gold ship' sail into a diplomatic row with Iceland"

"A group of British treasure hunters are claimed to have prompted a diplomatic row with Iceland after they were caught searching for a ‘Nazi gold ship’." 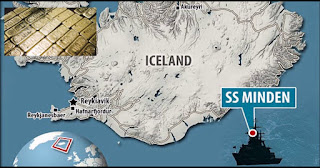 "A NAZI 'gold ship' has sparked a diplomatic row after Brit treasure hunters were caught hunting for its wreck in the Atlantic ocean."

See previous blog entries the topic the hunt for missing gold treasure of enormous value as associated with events of the Second World War: