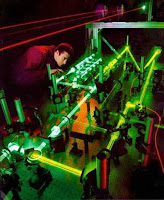 To war by laser.

Thanks once more to Zero Hedge.

"According to Aviation Week and Space Technology, additional engine power and thermal management capabilities of the F135 engine will allow for the use of directed energy weapons and other Defense Advanced Research Projects Agency (DARPA) inspired armaments, and if approved, would be featured in an upgrade package called Growth Option 2.0 (GO2)."