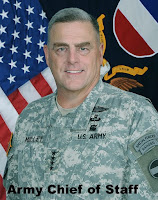 Continuing with extracts from the Strategic Outpost column of the War on the Rocks Internet web site with my commentary.

Army Chief of Staff Mark A. Milley wants you to know!

"Three Things the Army Chief of Staff Wants You to Know"

Those three key points the CoS wants you to know to include:

"Milley talked at length about his views on how war will change in the future. He argued the fundamental nature of war (including fear, uncertainty, and chance, according to Clausewitz and others) will remain largely unchanged, but the character of war is evolving rapidly."

"The future battlefield will not only be one of chaos and unpredictability, but will frequently lack reliable communications up and down the chain of command."

"With less than 1 percent of the population serving in the military, the divide between the military and American society is growing ever deeper."

NOT NECESSARILY DISOBEY ORDERS. EXERCISE YOUR INITIATIVE AS IS COMMENSURATE WITH A DYNAMIC SITUATION IN KEEPING WITH THE COMMANDERS ORIGINAL INTENT!1