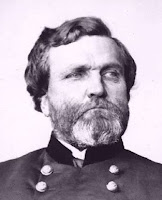 Thanks to "The Reader's Companion to Military History" and the "American Civil War" article by Williamson Murray.

". . . what remains inexplicable is the considerable contrast between the eastern and western theaters in terms of the performance of the opposing forces. Unfortunately the disparity in the military effectiveness of the armies has to a great extent eluded historians. All too often, histories of the war have depicted Southern troops as an idealized country folk, trained and prepared for war by their youth on farms, whereas Northern troops, living in dank factory slums, were incapable of fighting. In fact, 85 percent of the North's population lived on farms, and if Northern armies had a difficult time against Confederate force in the eastern theater, their comrades in the West dominated their Southern opponents throughout the war. The performance of Northern and Southern armies had less to do with the makeup of the armies - - they were all drawn from similar backgrounds - - than with the particular styles of leadership and battle effectiveness that resulted from idiosyncratic factors, such as the ability of senior leaders"

Think Lee, Jackson and the Army of Northern Virginia [Confederate] in the east. Think Grant, Sherman and Thomas and the various army formations of the Union in the west.

LEADERSHIP MADE ALL THE DIFFERENCE!