"War between Canada and the United States and planning for same has to be taken within the context of Anglo-American relations."

"Hostility between Great Britain and the United States with the possibility of armed conflict lasting until relatively quite recently historically, at least up unto the time of the Great War. Canada as a nation not totally fully sovereign and independent until 1977."

Those two specific instances that "possibility of armed conflict" between the United
States and Great Britain: 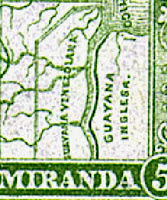 "The Venezuelan crisis of 1895 occurred over Venezuela's longstanding dispute with the United Kingdom about the territory of Essequibo and Guayana Esequiba, which Britain claimed as part of British Guiana and Venezuela saw as Venezuelan territory"

The British submitting to arbitration only after being warned that the United States might intervene under the Monroe Doctrine. NO ACQUISITION OF NEW TERRITORY IN THE AMERICAS BY EUROPEAN POWERS.

PAY THE DEBT YOU OWE US OR WE SHOOT!

"The Venezuelan crisis of 1902–03 was a naval blockade from December 1902 to February 1903 imposed against Venezuela by Britain, Germany and Italy over President Cipriano Castro's refusal to pay foreign debts and damages suffered by European citizens in the recent Venezuelan civil war."

"U.S. President Theodore Roosevelt forced the Germans to back down by sending his own larger fleet under Admiral George Dewey and threatening war if the Germans landed"

ONCE AGAIN THE MONROE DOCTRINE INVOKED, THE EUROPEAN POWERS NOT WILLING TO BEGIN A WAR WITH THE UNITED STATES.

That Monroe Doctrine still alive and well? Has not been invoked or even mentioned since the time Cuban Missile Crisis? But remains in place nonetheless.